The Port and Starboard block is our newest design for Month Six of the River Heritage Mystery Quilt!

I knew from my Girl Scout canoeing days that “port” means LEFT and “starboard” means RIGHT. It’s easy to remember that the words “port” and “left” both have four letters. The same is true when looking out the front of your boat, vessel, ship, or even kayak, I guess.

How Port and Starboard came to be.

What I didn’t know was how those terms came to be.  Here’s what I found out:

Initially, boats were controlled by a steering oar (before the rudder was centered on the boat) which was usually on the right side of the stern. Sailors would call that side the “steering side”. Eventually, the two Old English words “steor”  and “bord” combined, which mean “steer” and “side of the boat”.

The opposite, or left side, of the boat was usually used for docking and loading the boat. Therefore, it was known as the “larboard”. Apparently, “larboard” was too easily confused with “starboard”, so the term “port” was adopted to refer to the side that faced the porters who loaded (ported) supplies onto the boat.

So there you have it! Port and Starboard. 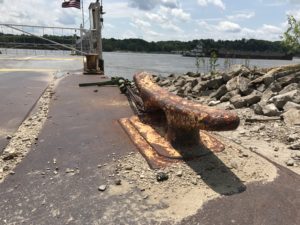 Now for the ferry ride!

While brainstorming for ways to photograph the river for this fun mystery adventure, I thought of the ferry crossing in Ste. Genevieve. I have vague memories of crossing the ferry as a kid and I remembered that my Uncle Elmer piloted the ferry for a number of years. My cousin, Bonnie, shared with me that he and 4 other men purchased the ferry in 1975 to keep it running for farmers who lived in Ste. Genevieve and farmed in Illinois. He would pilot the boat on the weekends during his retirement.

Uncle Elmer loved the river and spent a lot of time there. If my Aunt Alice didn’t know where he was, she could find him at the river talking to fishermen and farmers. Before he married Aunt Alice, he was a river boat pilot pushing barges from St. Louis to New Orleans. Now his grandson, Jeff, pushes barges from Tower Rock in Ste. Gen. down the river as far as New Orleans.

Elmer’s younger brother, Bill (my dad), also worked the river as a young man. The only story I remember from my dad about working on the river is that once while in New Orleans he got an anchor tattooed on his arm. Apparently, this brought a lot of trouble from his siblings when he got home! I loved tracing that anchor with my fingers.

Watching the maneuvers of the ferry first hand made me realize just how important are Port and Starboard!

The Port and Starboard quilt block is really fun to make!

Similar to the Trail of Tears block, this block is made from sixteen half-square triangle blocks. The difference is the layout.

Remember to check your values.

Here you see both the color and black and white versions of my block. This is how I check the values before stitching my block together.

Additionally, you’ll continue with your own color scheme for your fabric choices.

SHOP more than 50 quilt patterns that use BOTH beautiful sides of fabric HERE!

Thanks for subscribing! Check your email to confirm your account:)